Today I thought I’d take a look at luddite.com, and was saddened to see that site is no longer a straight-faced parody of a computer company–one that makes PCs out of wood. The domain is now in the unironic hands of someone who might not even know the meaning of the word.

Fortunately, the original site lives on at the Internet Archive–best viewed at a screen resolution of 640 X 480 pixels! 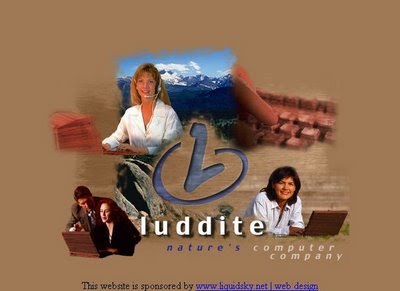 The fun apparently ended in 2005. Since then, the domain had been repurposed for a stupid pay-per-click page (2005), and then a directory of travel agencies (2005), before finding use in the service of IGE “The Leading MMORPG Services Company”–as though there are any Luddites playing World of Warcraft .

Well, maybe there are. There are (or were) people who played DOOM “Gandhi Style”–meaning “barehanded, without harming any monsters.” Perhaps there are also people in WoW who want to overturn the oppressive virtual world and wake the gamers up to real life. (Sounds like a cross between The Matrix and WALL-E.)