‘Live Free or Die’ vs. ‘Eat Dirt and Sing’ — A visit to Andasibe

By ted, In Adventures, Pleasures

If you’ve ever worn a headlamp while walking a dog at night you know that dog eyes reflect light right back at you. Cat eyes do too.

When I lived in Flagstaff, I often wondered why I never saw the reflected eyes of any other critters in the woods looking back at me in the night. I would see deer and skunks at night sometimes, but not by the reflections of their eyes.

I developed a theory that only domesticated animals would look right into a light source, because they aren’t afraid of people. Wild animals, on the other hand were busy slinking or scurrying away.

A Web search would have proved that my theory was stupid, but I would always forget to look it up by the time I got home back from the dog walks.

Here’s the real reason the eyes of some, but not all, animals show up in headlamps:

Eyeshine is a visible effect of the tapetum lucidum. When light shines into the eye of an animal having a tapetum lucidum, the pupil appears to glow.

Most primates, including us, don’t have tapetum lucidum. But you know which primates do?

I took a trip to Andasibe, a village that requires you to suspend what you know about the silent e. It rhymes with hot sauce eBay.

Skip the narrative and look at the critters >>

Andasibe is also surrounded by rainforest and protected parks: Andasibe-Mantadia National Park, and Mitsinjo Reserve where I took that photo above.

And it’s also pretty close to Antananarivo — something like three hours away by car, if you were to go nonstop.

I wanted to have this be partially a bike trip, so I took a bush taxi as far as Moramonga, which is pronounced the way you think it would be pronounced. It also sounds like a made-up word from a Gilligan’s Island script.

Professor: You have a severe case of moramonga.
Gilligan: Zat is what she has alright.
Mary Ann: What is moramonga?
Professor: It’s a medical term my dear no concern of yours.

I arrived late to Moramonga with my bike strapped to the top of the mini bus.

There was a lot of activity at the main crossroad, even though it was pushing midnight. Taxi drivers and bike taxis converged toward the mini bus. My goals were to not seem bewildered and to find a place for the night. I walked, pushing my bike, as if I knew where I was going.

It was a short walk. The lights were on at Hotel Nadia. Through the gauzy curtains of the main entrance I could see night the receptionist asleep at the desk.

Compared to Chez Nono in Mahajanga ($6.42 US per night), this was a palace. Sure, there was no soap, no towels, no toilet seat — not a single lux-ur-y. Chez Nono had prepared me for that. But there was a TV, which apparently is a higher priority than soap or a toilet seat.

(I bet most Americans — if you were to poll them on this question — would be more willing to give up toilet seats for life than television. I mean, just a bare rim isn’t so bad if it’s clean.)

In the morning, I snapped this panorama of Moramonga from the walkway outside my room after returning from a quick shopping trip to buy soap and toilet paper.

Then I packed up the bike and headed in the direction of Andasibe. Supposedly only about 14 miles away, but I think it’s more like 18 miles.

I had called ahead to a hotel called Les Orchidées (lays oar-key-DAYs) and had a reservation. The price per night would be 40,000 Ariary ($12.85 US), so my expectations were high.

I pedaled past the fancier hotels right on the fringes of the forest, such as The Vokona Forest Lodge ($84 US per night). The streets narrowed. I left the asphalt and followed dirt footpaths and cobblestone streets.

The building facades were gray weathered wood and the roofs were rusty corrugated tin. It reminded me (as many older neighborhoods in Antananarivo do) of how I imagine Dickensian London — but with vendors selling bananas.

I asked directions about four times, but finally found — right in the middle of the village of Andasibe — Les Orchidées.

They were expecting me. I was shown to my room.

The first thing I did was take a nap. The mattresses I’ve used in Madagascar are like huge foam rubber sponges, and they smush down in the middle after awhile. This one, though, was nice and flat. The best mattress I’ve slept on in months.

After some glorious napping, I reserved a spot on a night trek in Mitsinjo Reserve.

Then I had a few hours to kill.

I wanted to spend the bulk of the following day in Andasibe-Mantadia National Park. You can’t go into the park without a licensed guide. The normal procedure seems to be that you show up at the park and you pick a guide the way you pick a taxi driver: You take the first one who notices you.

But I was really hoping to find a guide with a strong base in biology; not just someone who new the names of the plants an animals, but someone who could answer my hopefully above-average questions on evolutionary biology. So I went into the visitors center and scanned the candidates.

I inquired about a guy named Richard whose laminated bio said that he was knowledgable about primates and bats, and that he spoke English. Richard happened to be hanging around the entrance to the park. We had a speed date, and we became engaged. We made an appointment for the next morning to go for a four-hour tour… a four-hour tour.

I explored the village.

There was a soccer game going on that afternoon which, unfairly, had to compete with the spectacle of a big truck full of gravel that had broken a small bridge.

After I had my fill of gawking I began my walk to Mitsinjo Reserve for the night trek, equipped with my camera and headlamp.

On the way I found this monument to the 1947 Malagasy Uprising.

On March 29, 1947, Malagasy nationalist tribesmen revolted in the eastern part of the island. One third of the island was seized before French soldiers stationed on the island received reinforcements from France, and were able to quell the rebellion. The loss of life was high – more than 11,000 persons died in the fighting, 180 of those reported to be non-Malagasy.

It looked like two oversized paperclips in the shape of a cross.

The night trek was great. My co-tourists were a bunch of Malagasy students. The guide was also Malagasy. But they spoke French and English to accommodate me.

Sunday morning my guide, Richard, met me at the hotel at 7 am.

A light mist hung over the village. I had a breakfast of breaded fried bananas as we walked together to the entrance of Andasibe-Mantadia National Park.

Richard was a little older than the average tour guide — which was partially why I picked him. I figured he’d had his fill of tourists from many nations. But he still had plenty of curiosity about America.

He stumped me with this question: What do Americans eat every day?

Malagasy eat rice pretty much every day. I think he imagined that Americans had a daily staple, but I couldn’t answer the question. I wanted to say it was sugar but I didn’t. I thought of the subsidized commodities that are in so much food. I told him that it was probably wheat or corn, but in some prepared and processed form.

Once in the forest, we were alone sometimes. Other times we would converge with a great collective of tourists all looking at the same thing.

A couple of times Richard would tell me to wait, and then would disappear into the forest. I would think, Oh boy! He’s using his secret Malagasy tracking skills now. This is going to be good!

It never panned out like that. But one of those times, as I was waiting alone in the primal forest, I received a text message on my phone. I looked at it. Decided it could wait.

As I was waiting alone in the primal forest, I received a text message on my phone. I looked at it. Decided it could wait.

Then I looked down and saw a leech on my pants leg trying hard to find some blood under the fabric.

I pulled on it. It felt like a rubbery booger between my finger and thumb — the world’s strongest booger. It did not want to let go. I was amused. When it finally broke free, it curled around with it’s mouth towards my fingertip.

I admit, I panicked and frantically shook it off with all the efficient skill of someone who has shaken countless boogers off his fingertip — as we all have, if we are honest with one another.

I did get to see some indri, but not up close. This is how they are described in my travel guide:

Standing about three feet high with barely visible tails, black and white markings and surprised teddy-bear faces, the indri looks more like a panda gone-wrong than a lemur.

And with that description in mind, I found myself looking straight up a tree, probably 150 feet, with the Bad Manners song Echo Gone Wrong running through my head.

A couple interesting things about indri: They sing and they eat dirt. They don’t only eat dirt, but that’s where they get some of their minerals. 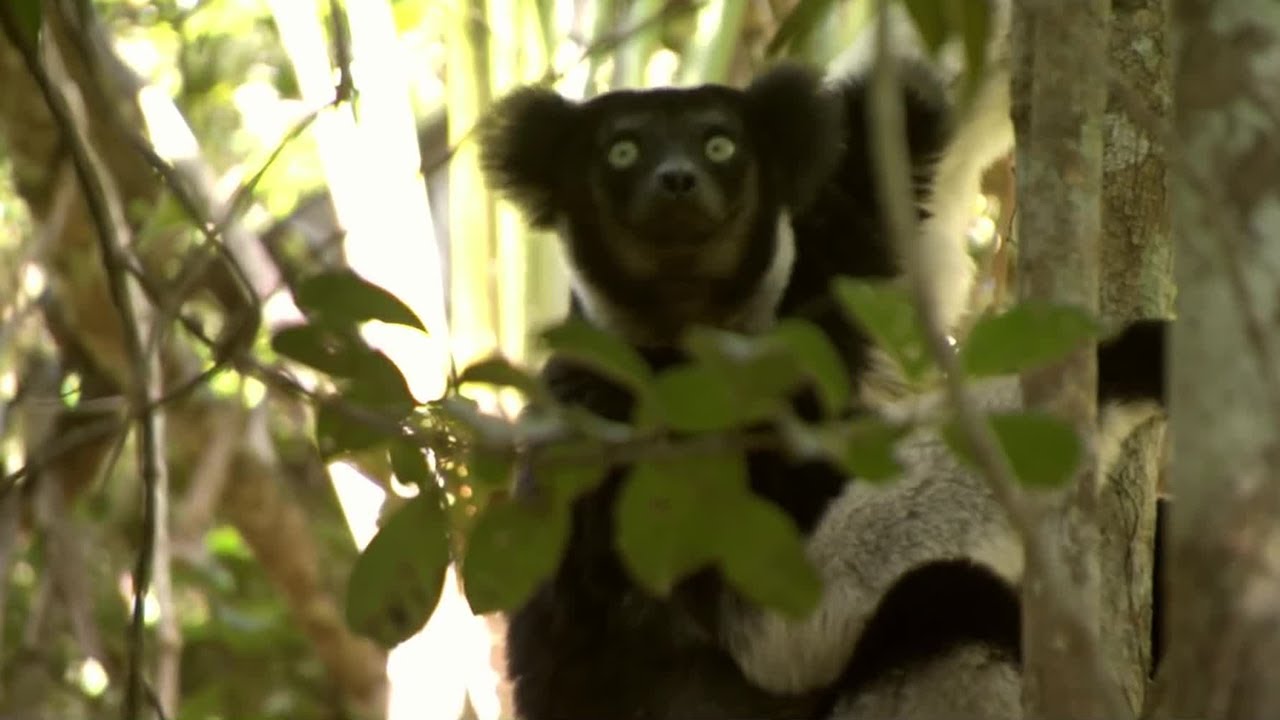 Indri, for some reason, can’t survive in captivity.

I think of great white sharks and some whales in this category, but not a primate. I can’t decide whether that’s good for them (maybe that fact helps motivate habitat conservation), or bad for them (we can’t keep them in zoo after we destroy all of their habitat). Either way, their fate is linked to another species of primate: the one that owns the chainsaws and drives the bulldozers.

When I left Andasibe-Mantadia National Park, it was still early afternoon. I could have packed up an gone back to Antananarivo. I could have been home that night, and I had to be at work the next day.

But I had read about the bats that live in the post office at Andasibe, and fly out at dusk. I wanted to see them. So I planned another night at the hotel, and I also planned a 5 am departure on Monday morning.

The bat burst lasted about 15 seconds. It caught me by surprise and I spent the entire quarter-minute fumbling with my camera. I didn’t get a photo.

I went back and sat on the some stairs in front of the hotel and watched night fall. I imagined what it would be like to live in a village like this, rather than in the bigness of Antananarivo.

I had gone three days without Internet access. I was Jonesing, I admit. But I think I would like it — again.

Thanks for not skipping the narrative. Now enjoy looking at the critters: 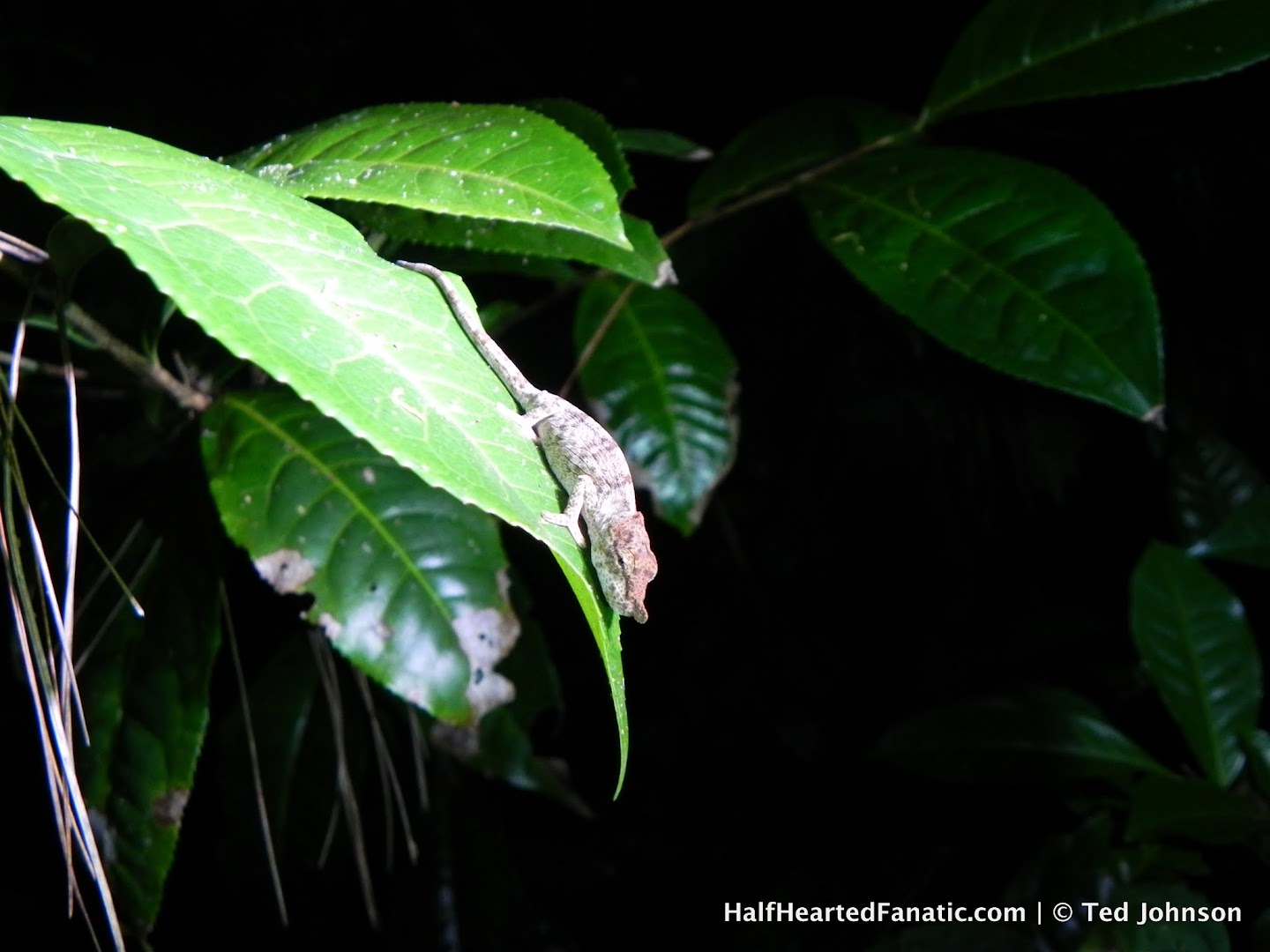 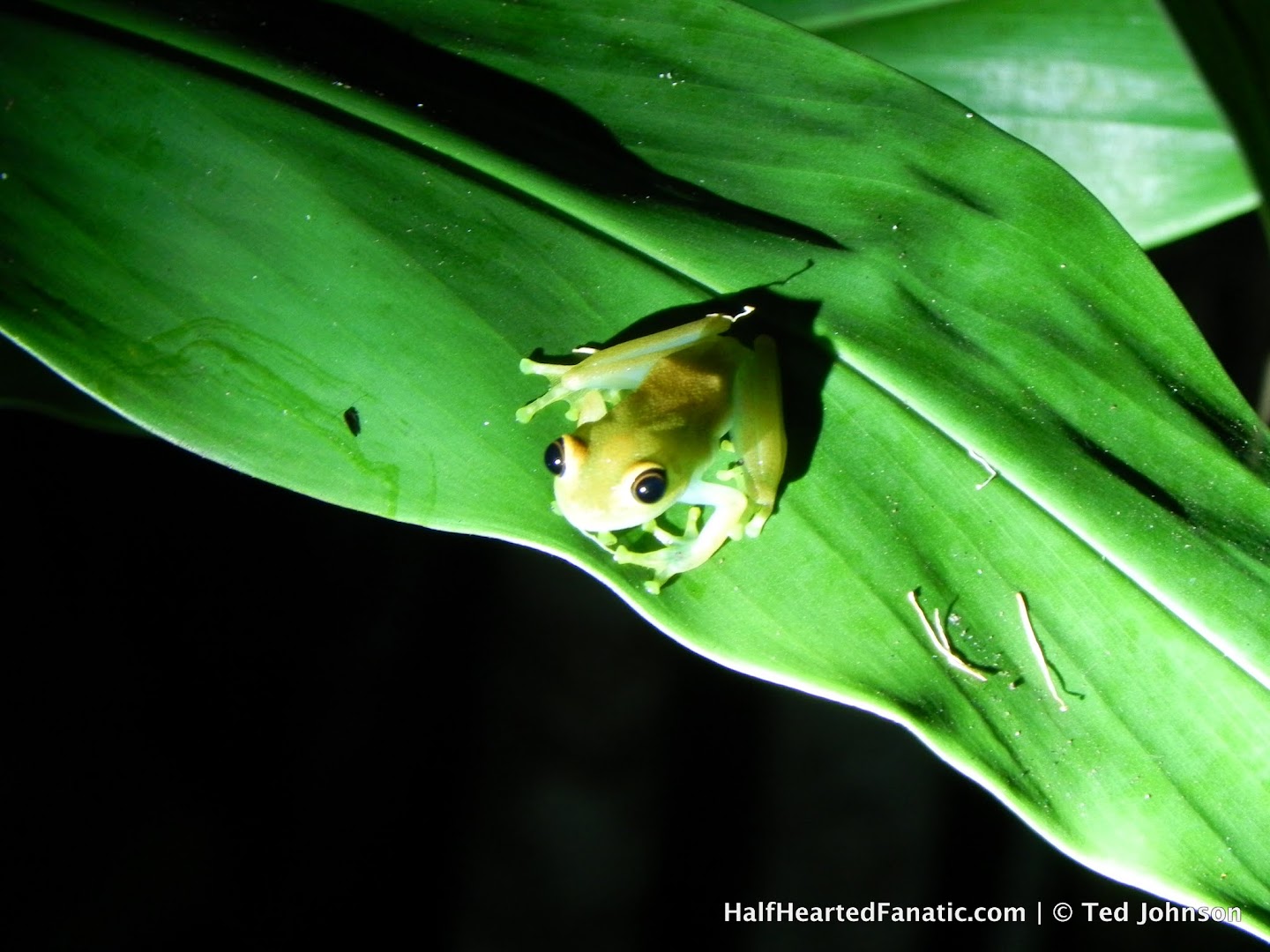 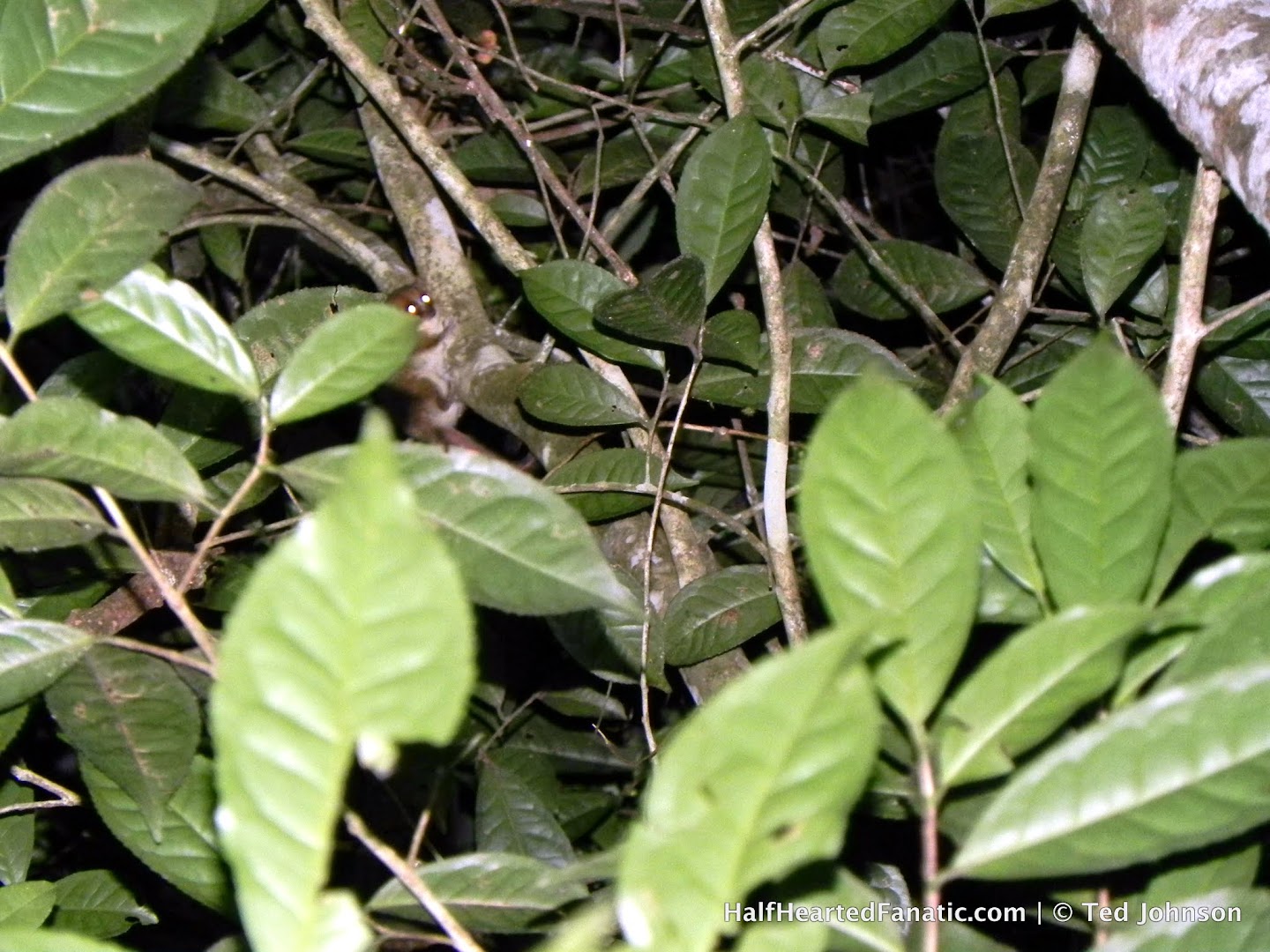 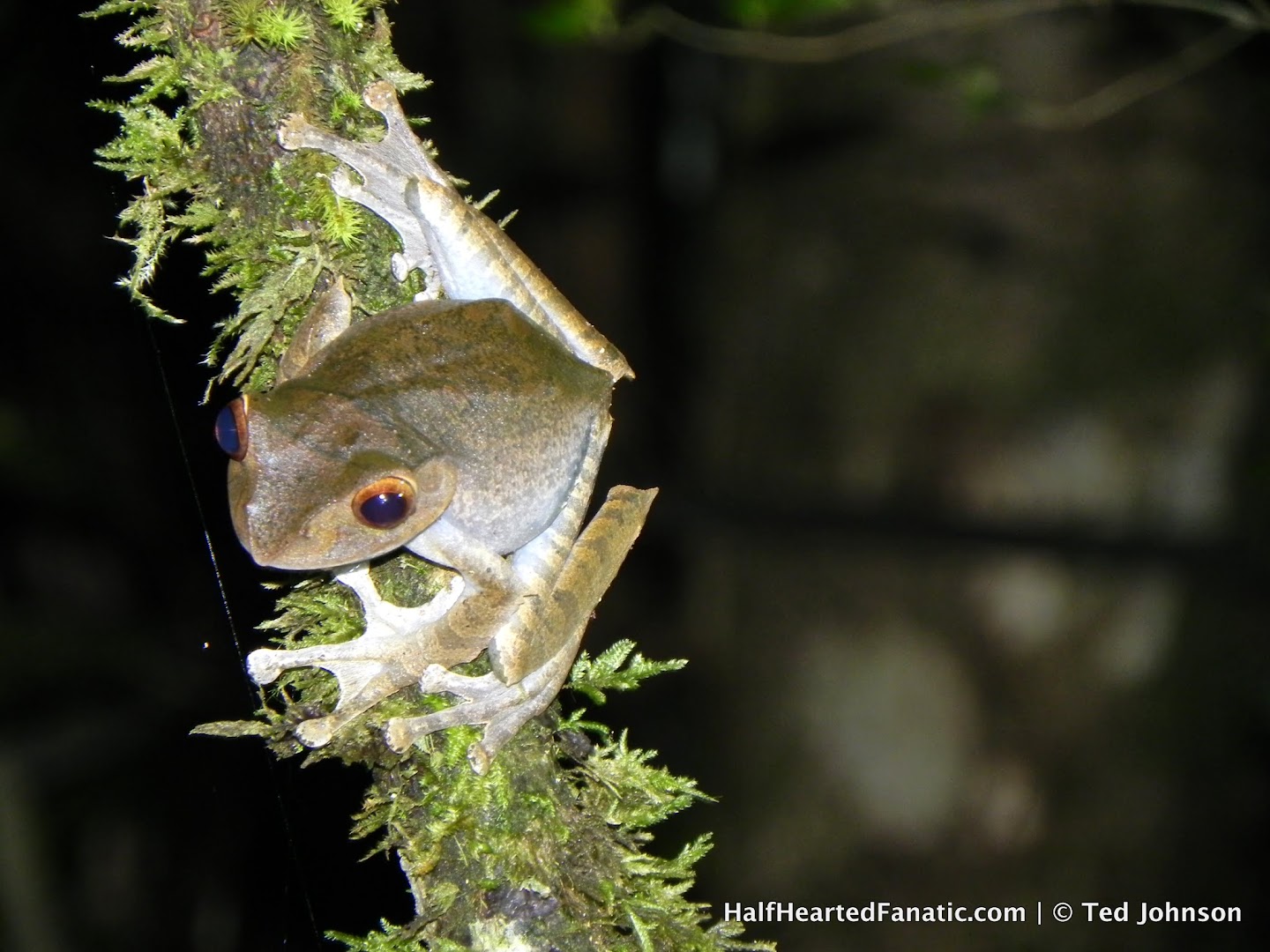 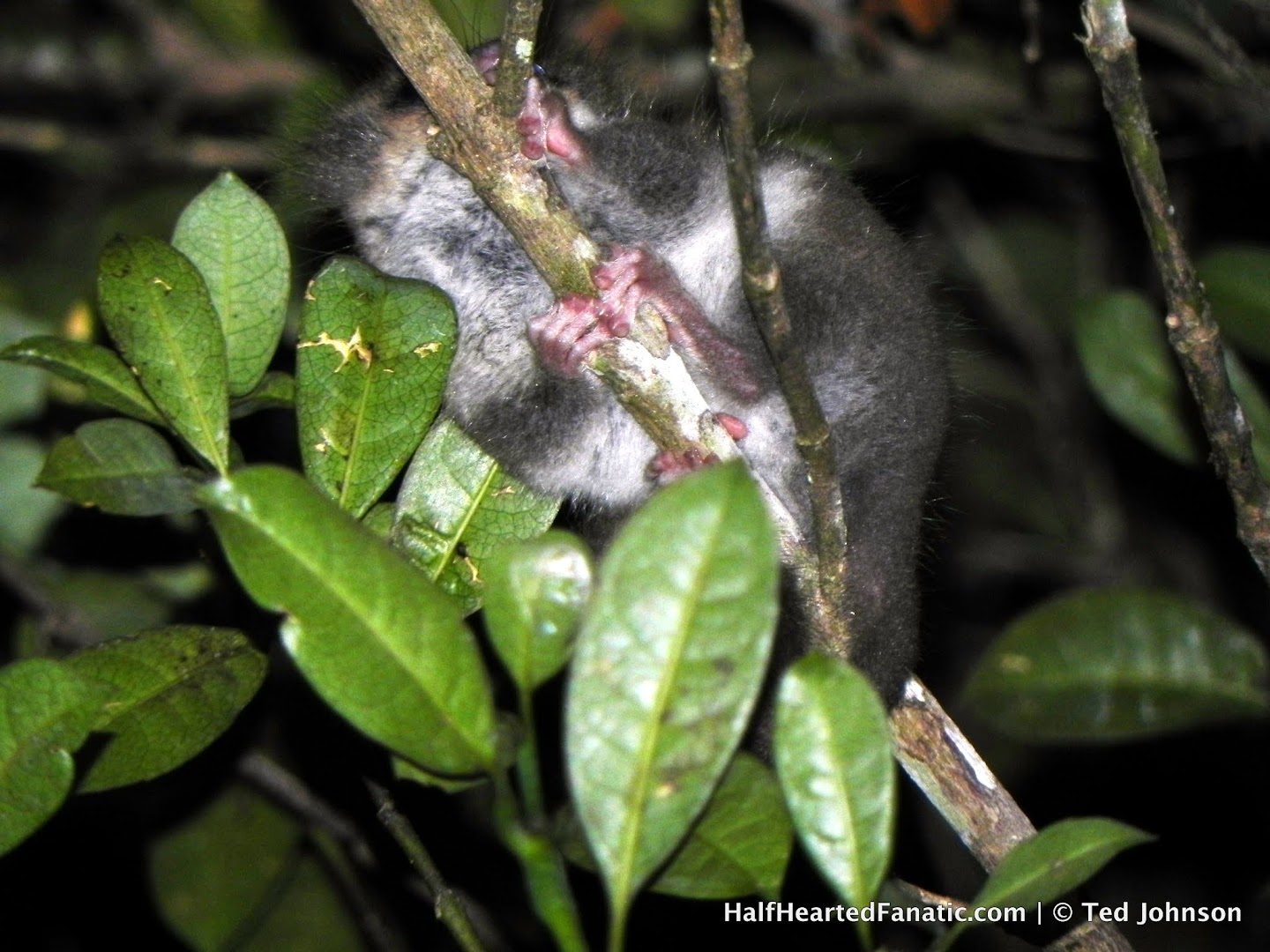 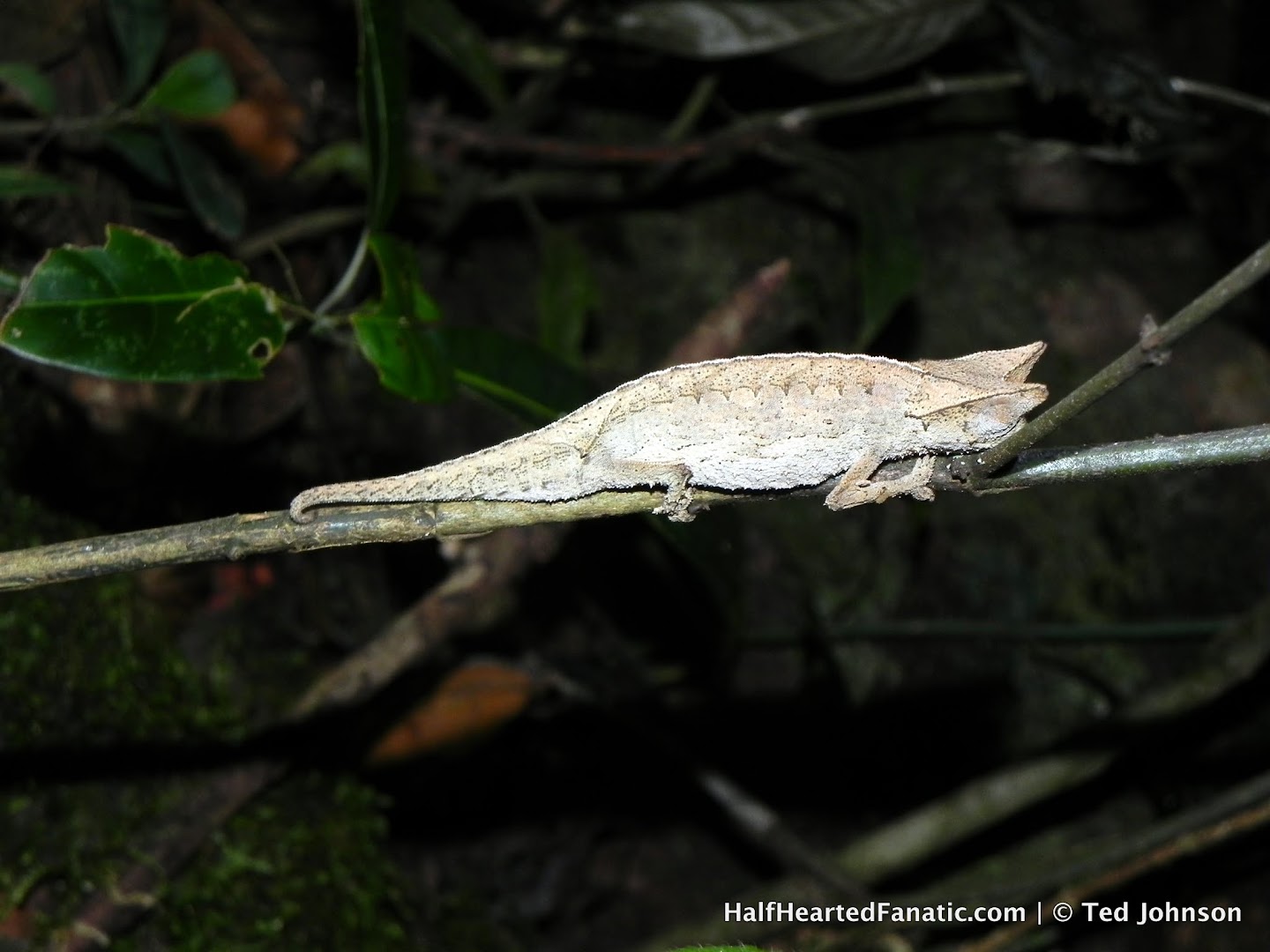 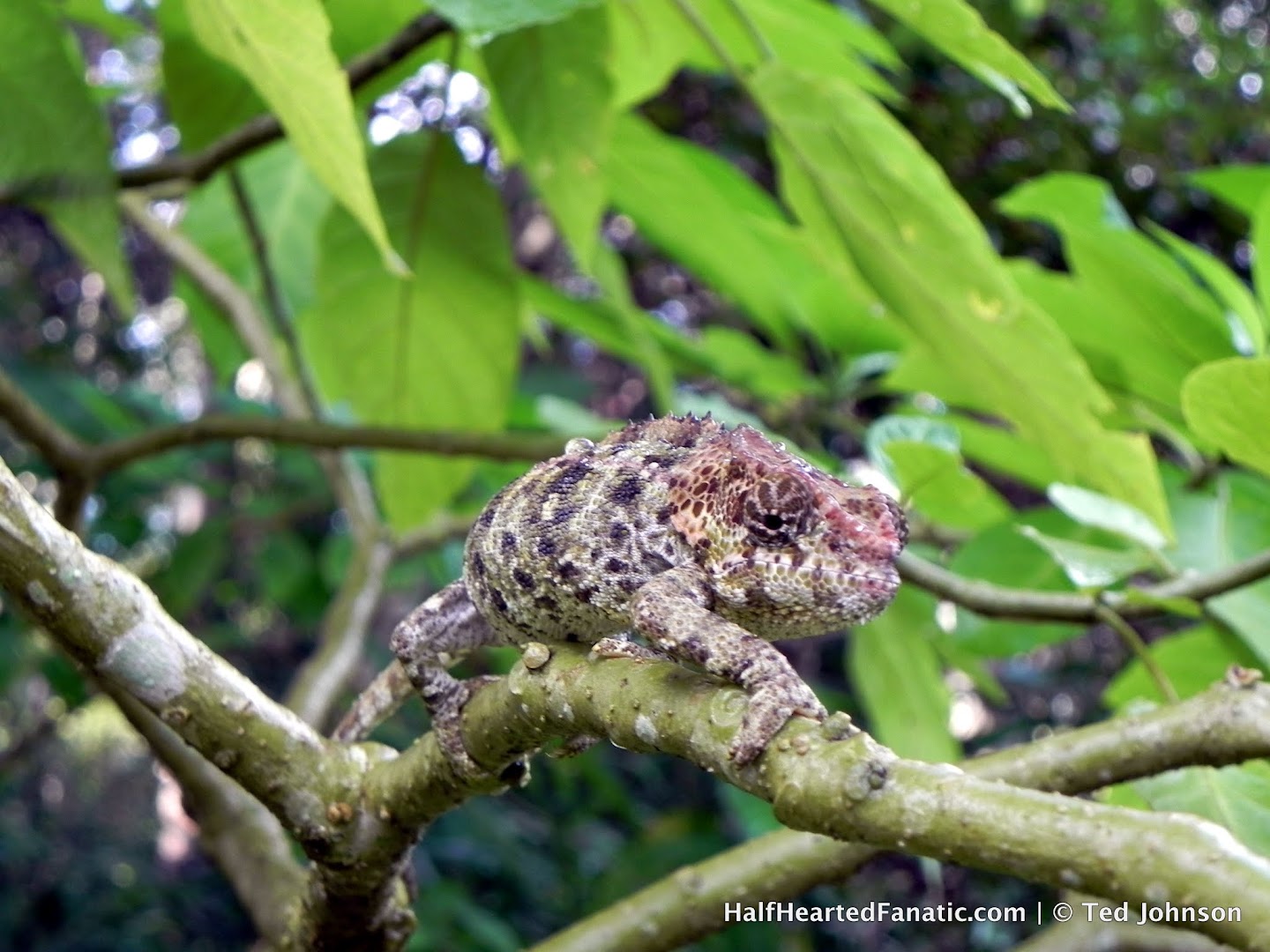 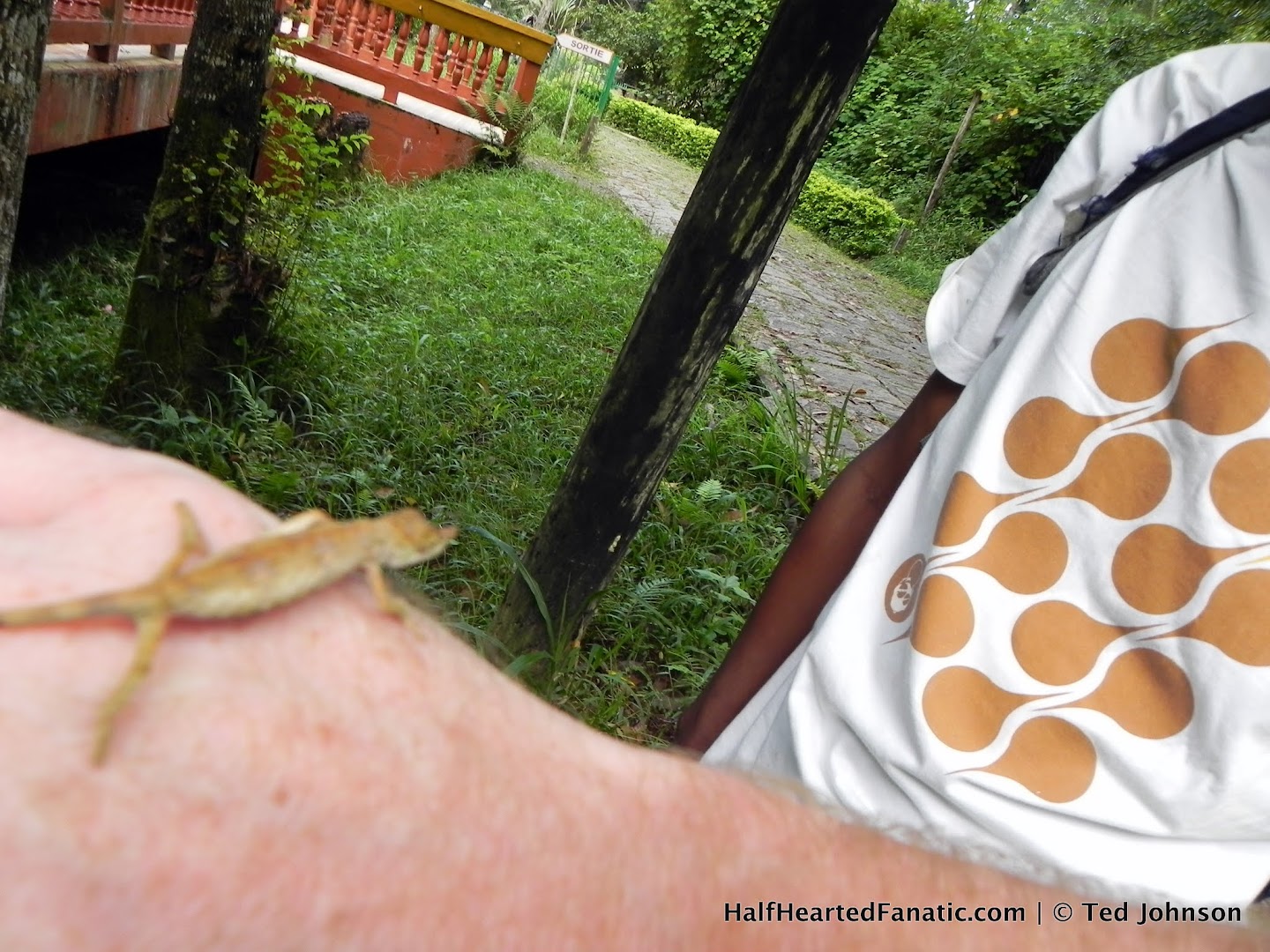 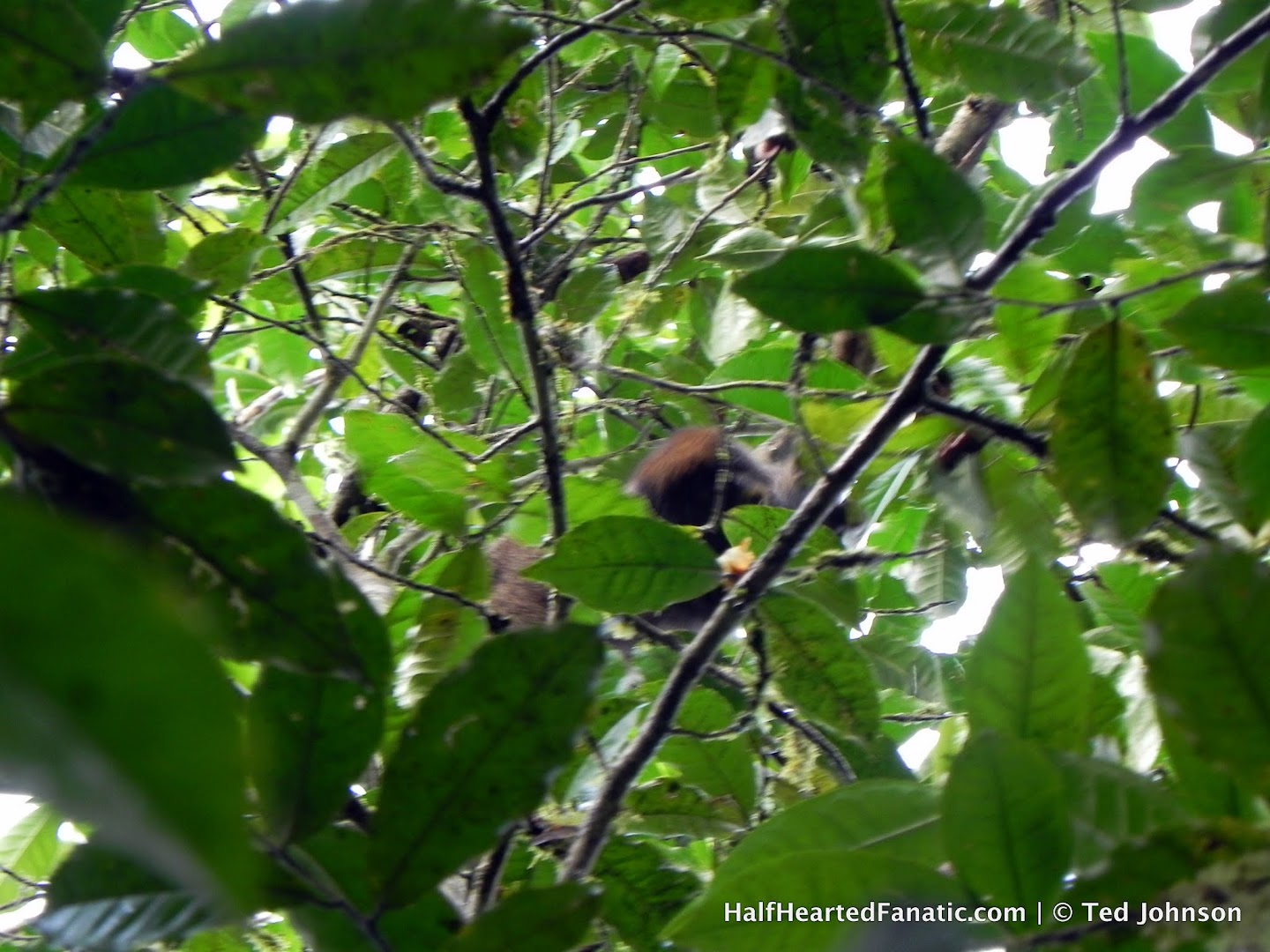 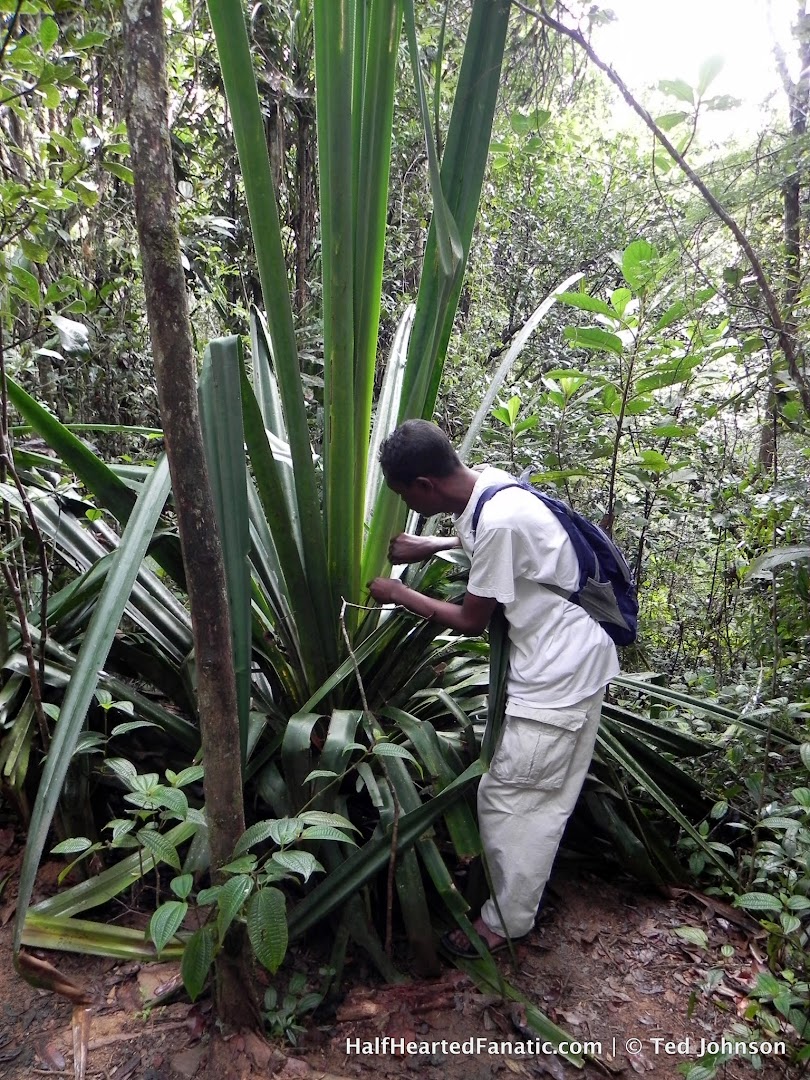 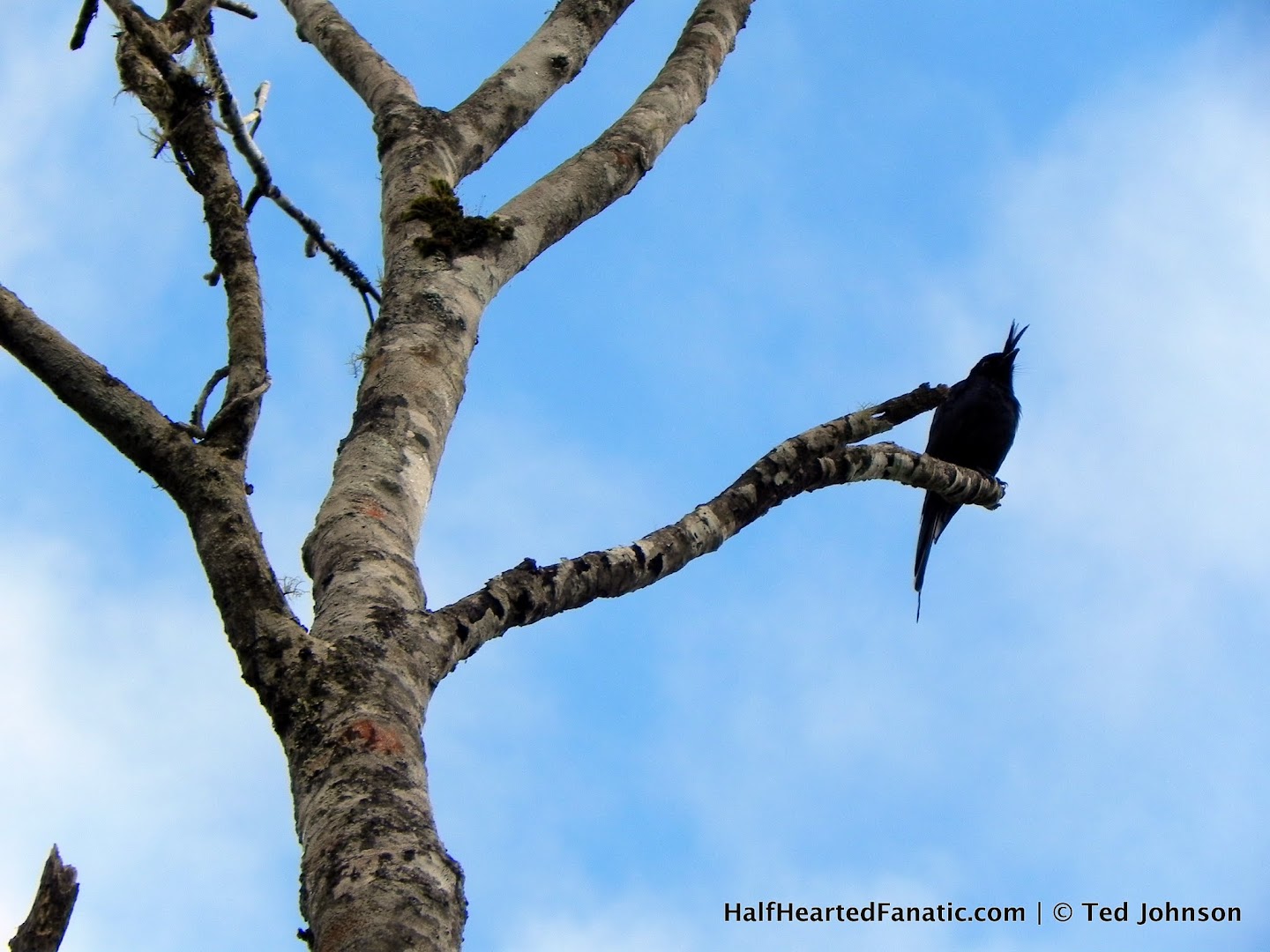 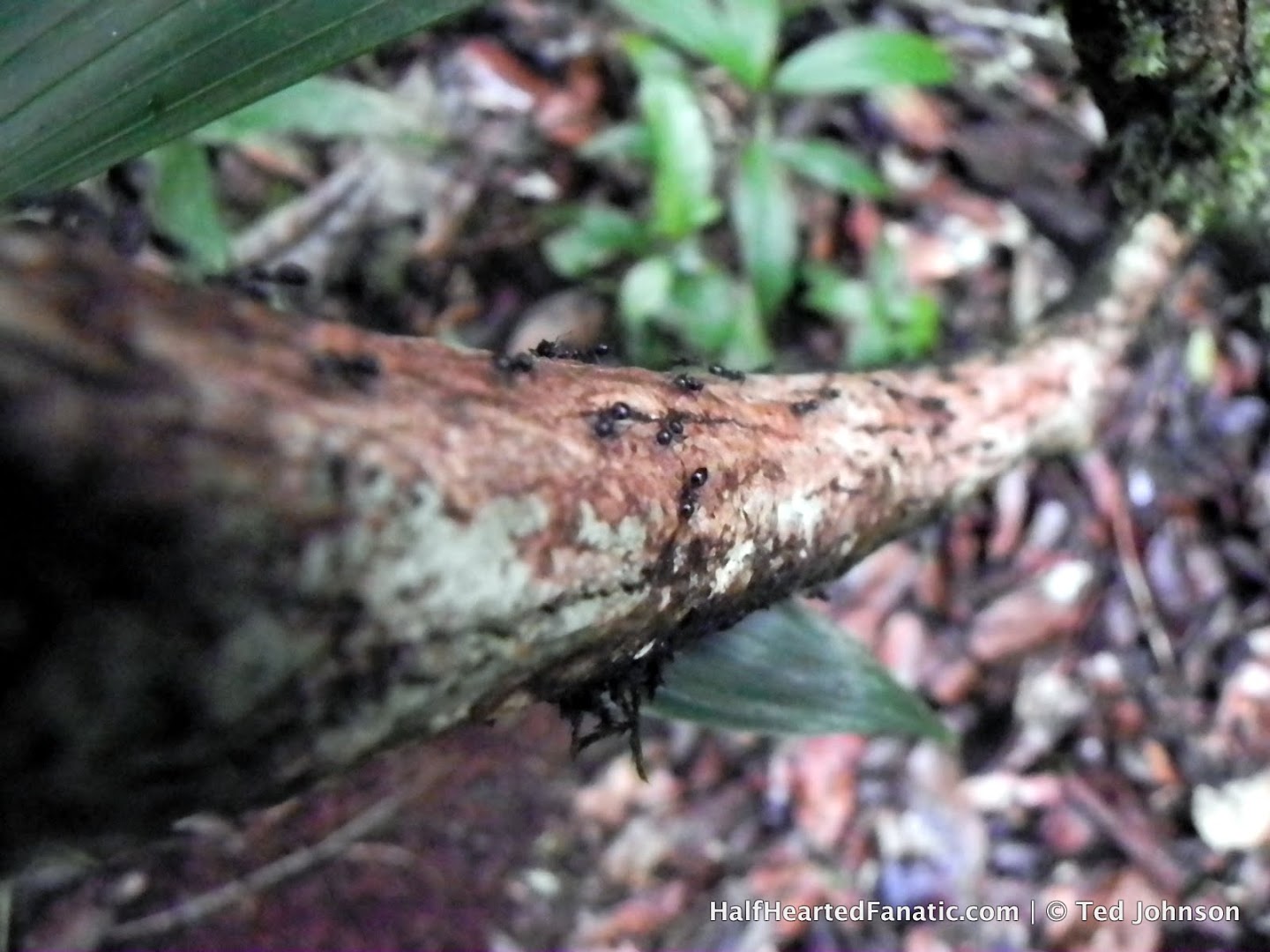 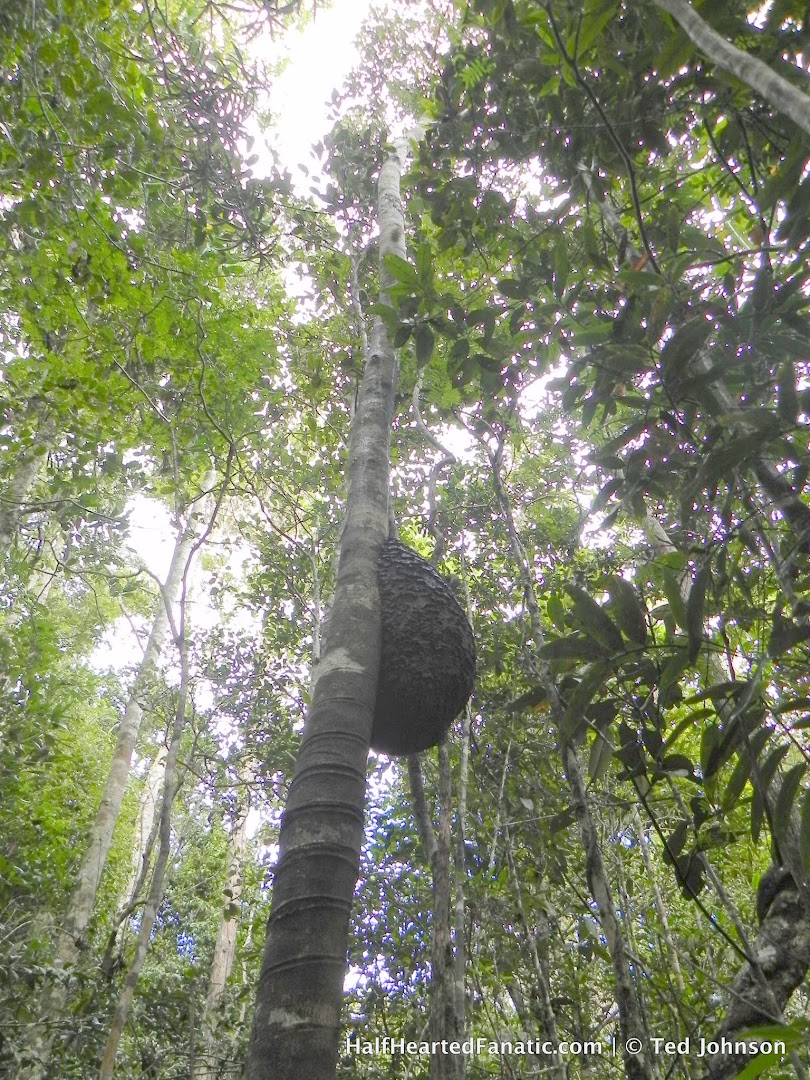 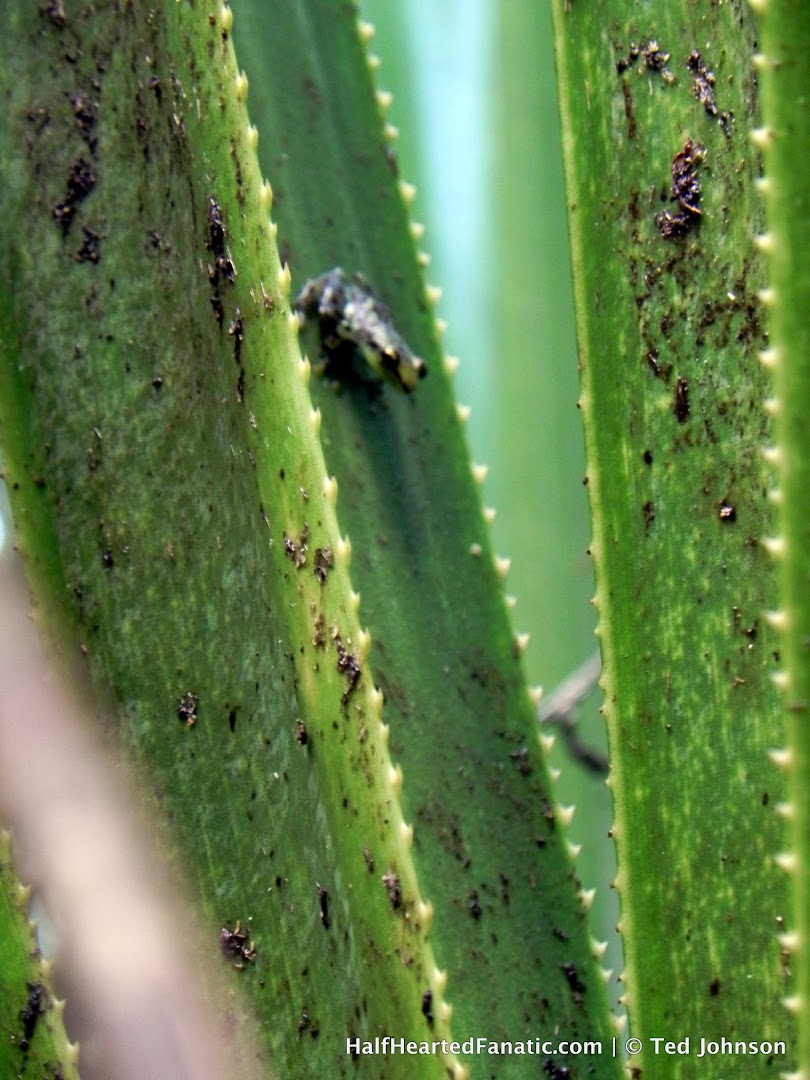 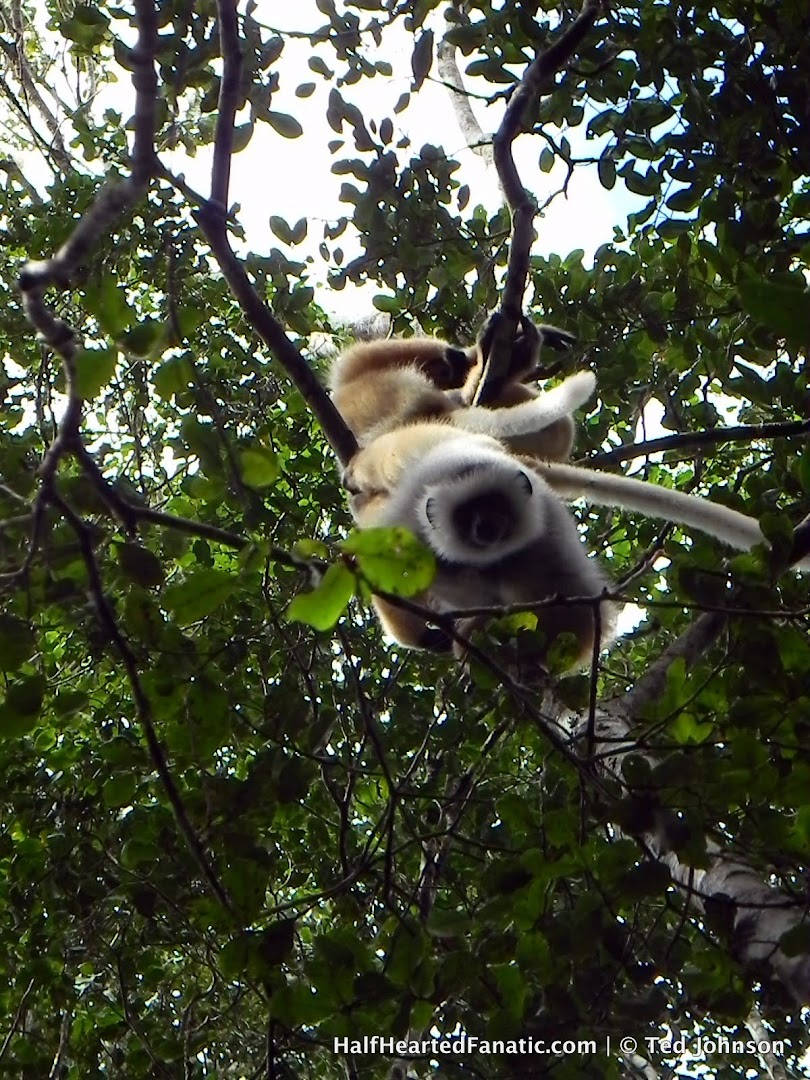 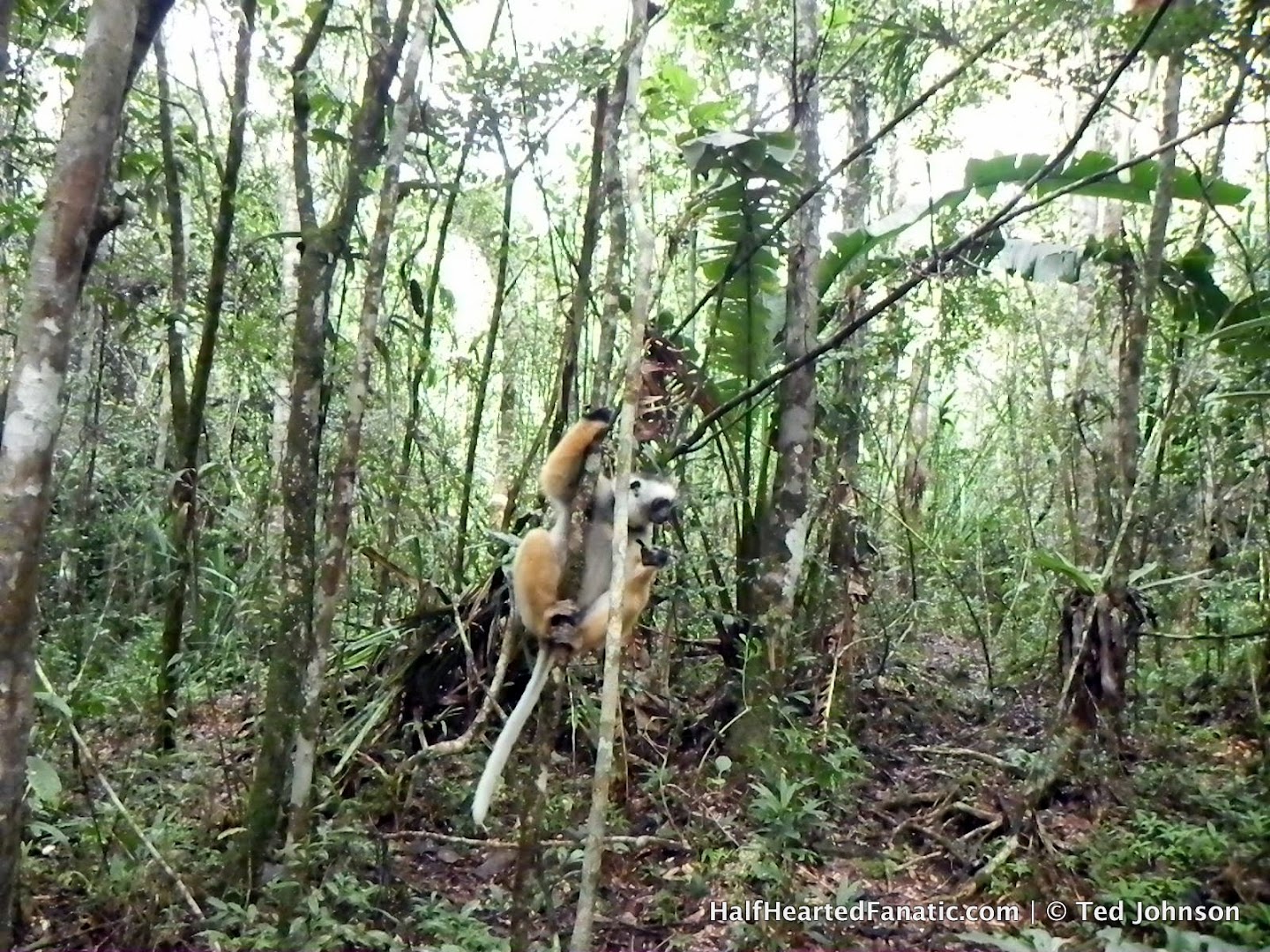 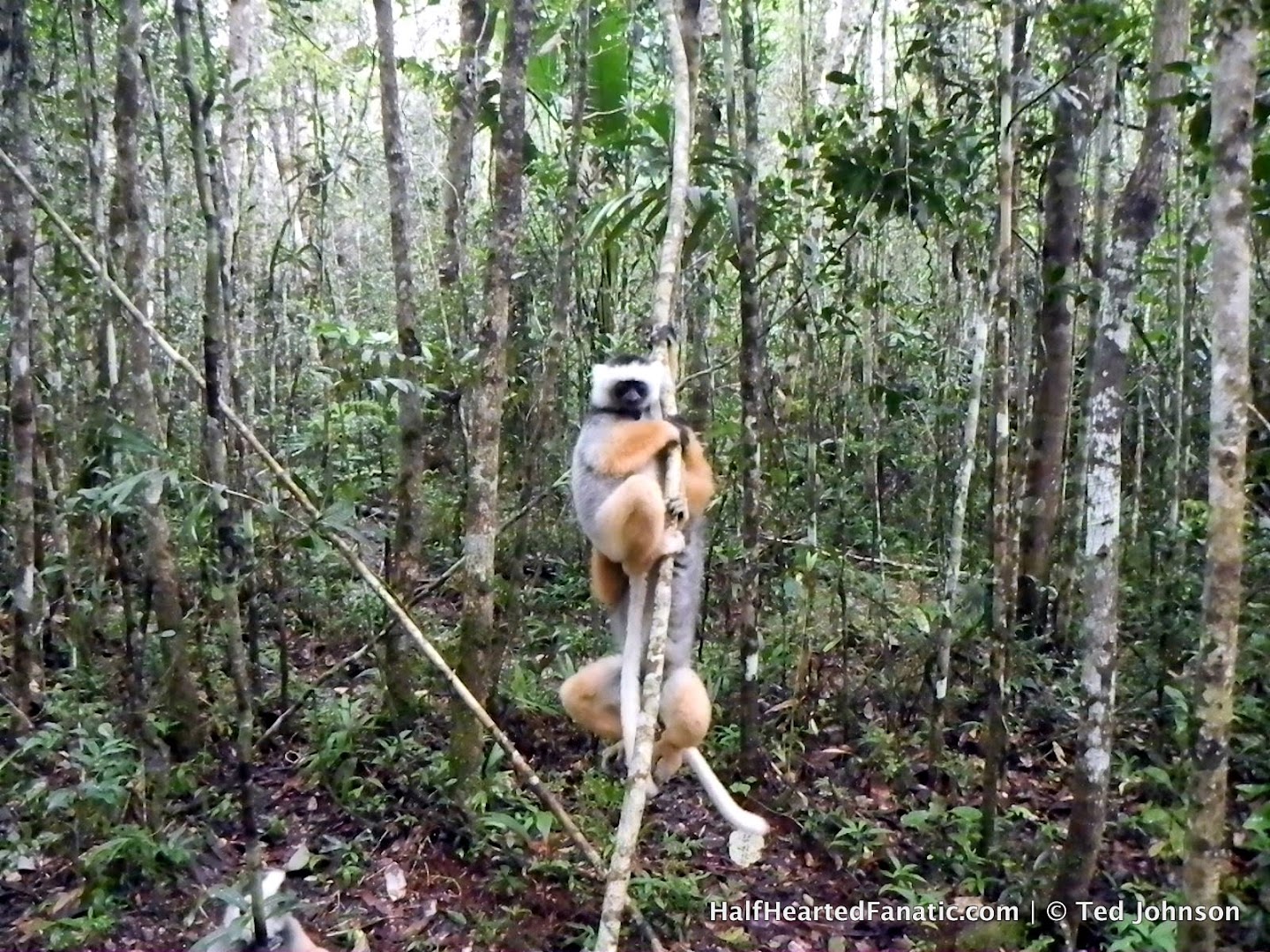 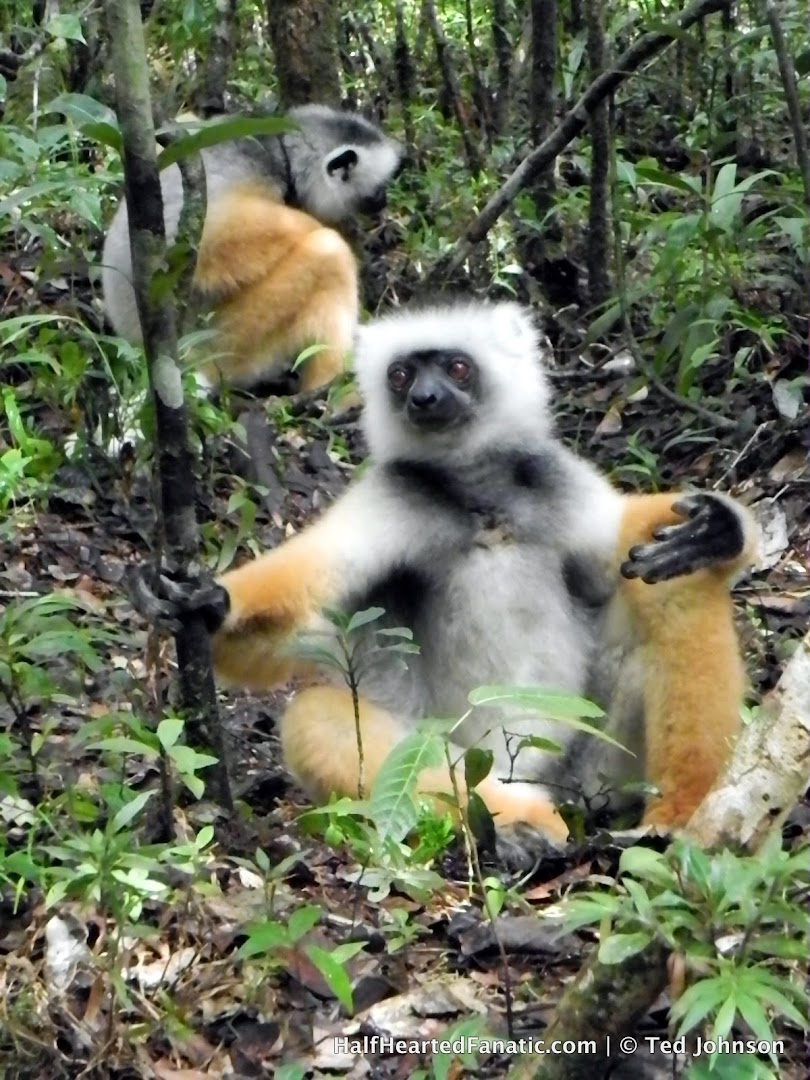 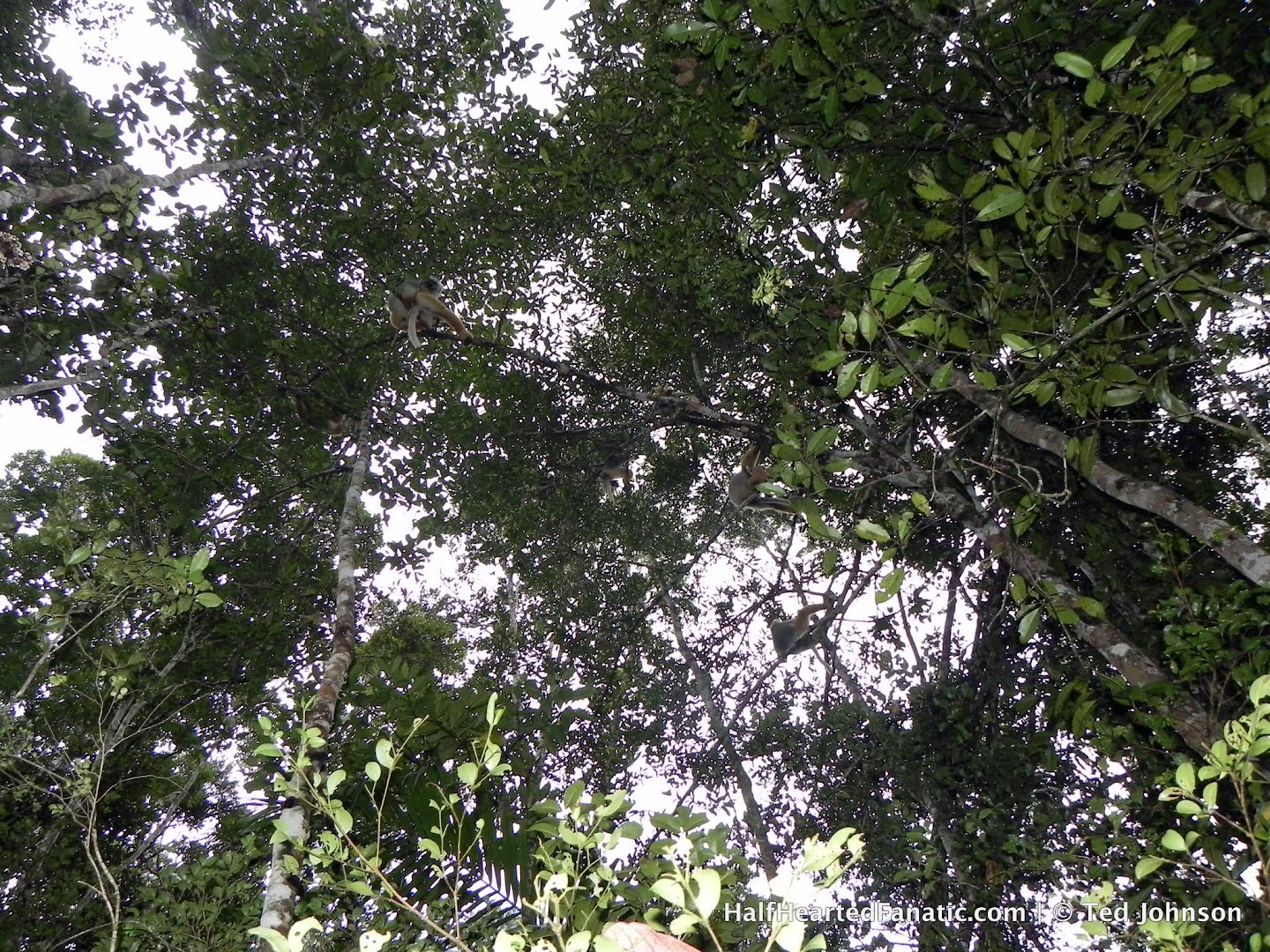 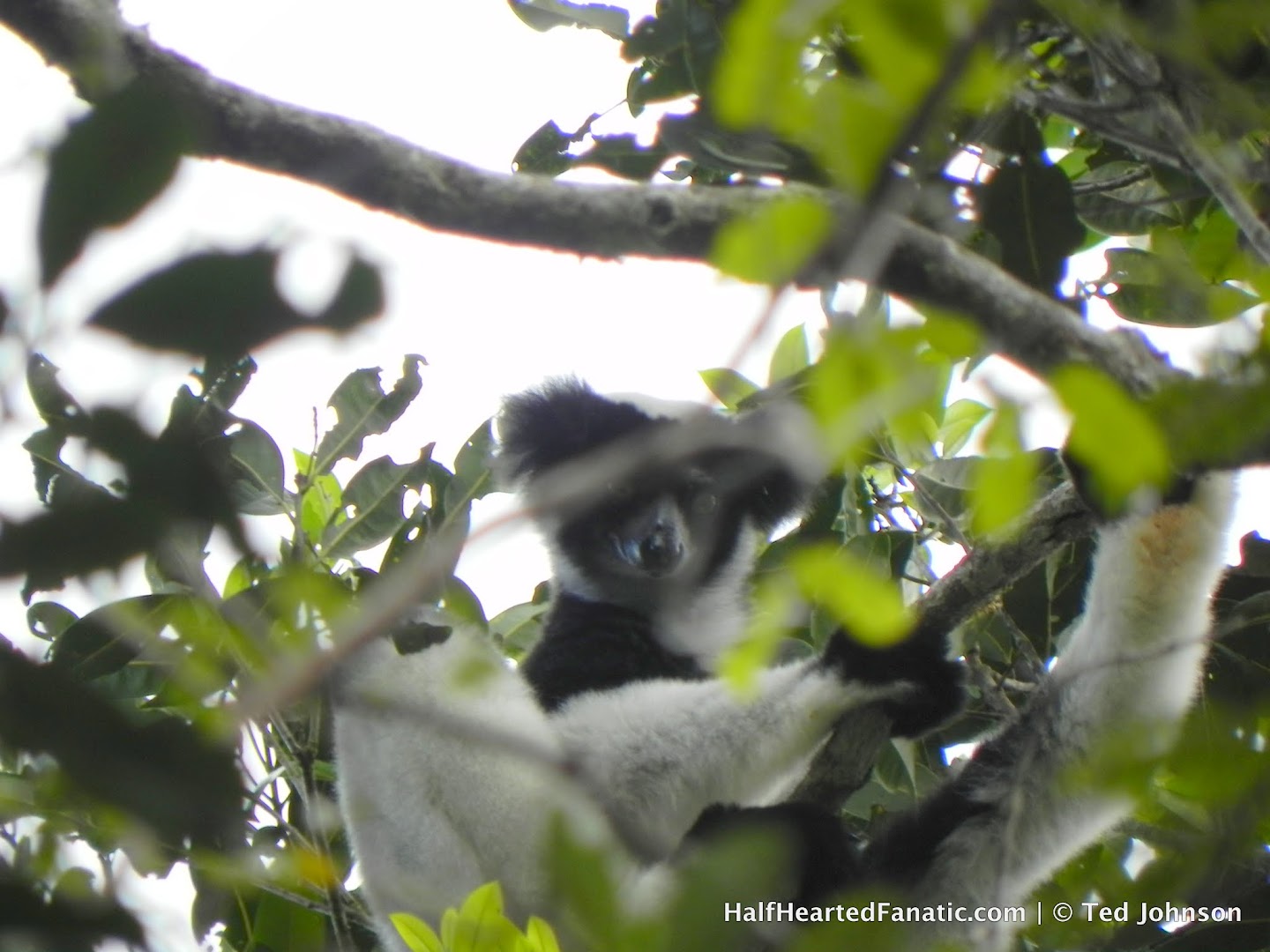 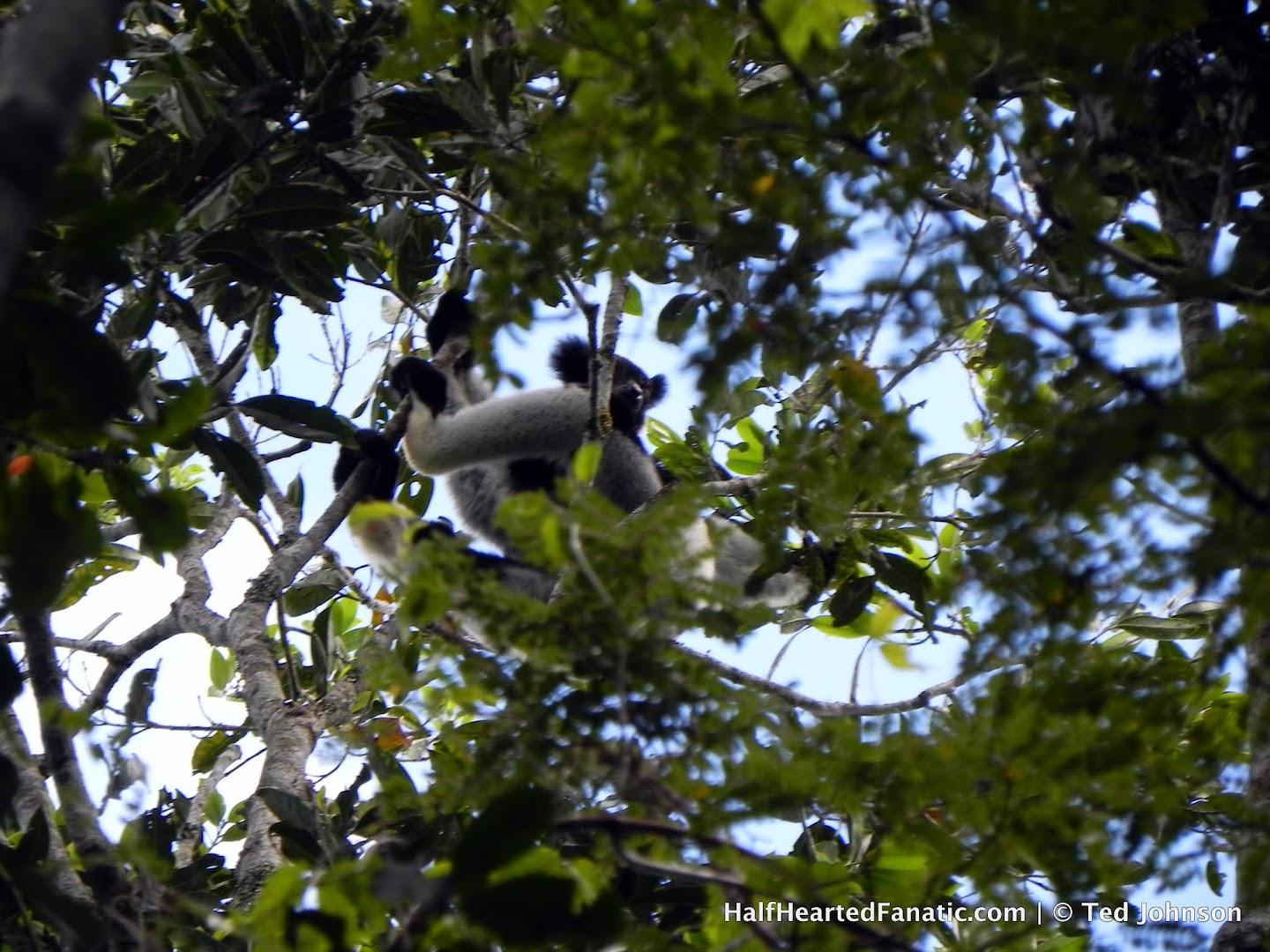 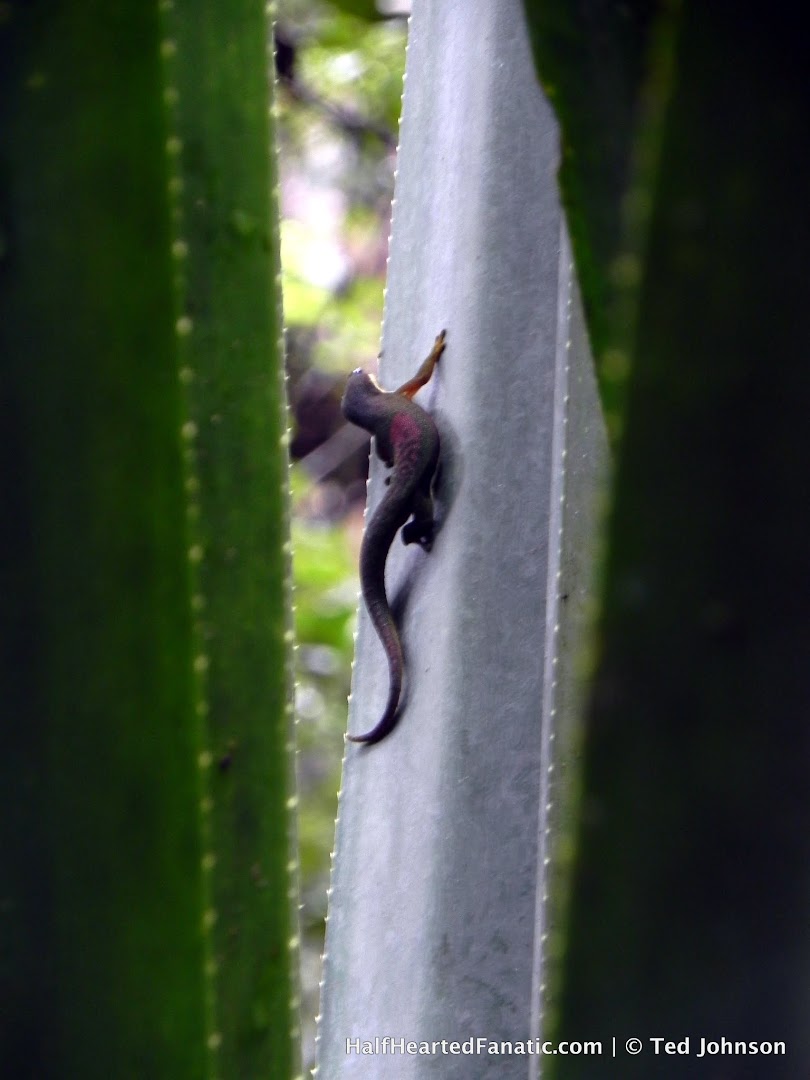 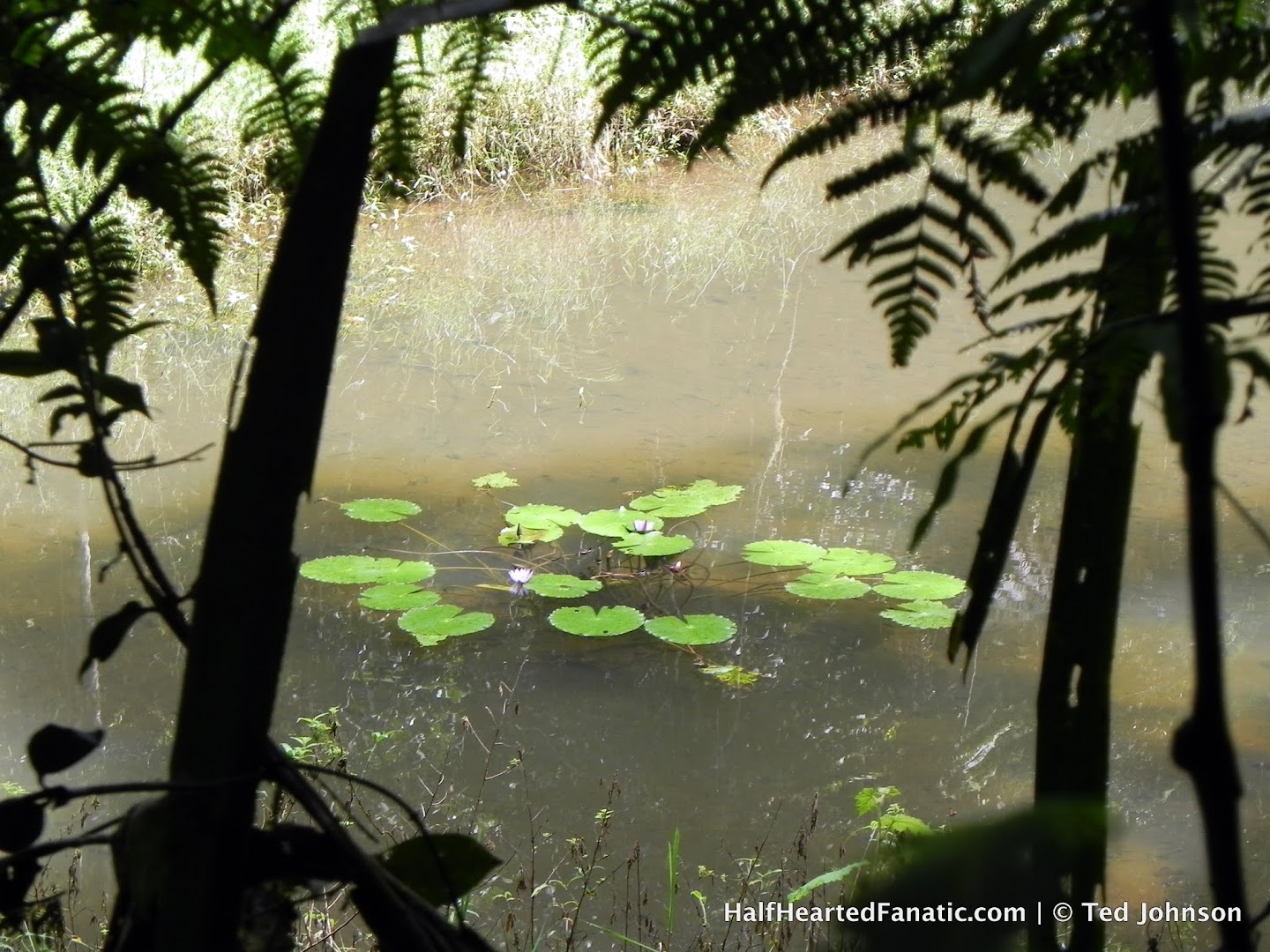 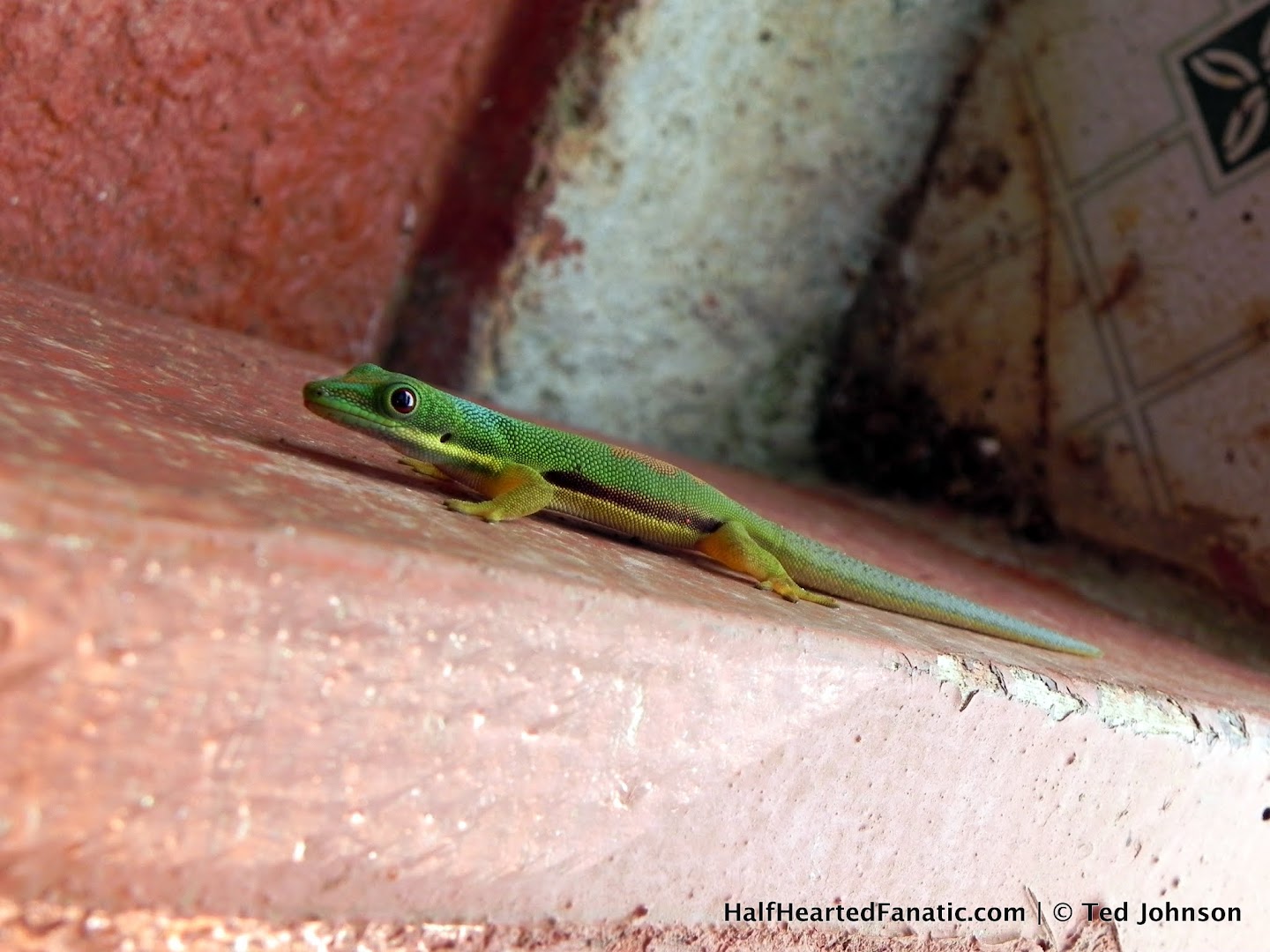