By ted, In Crusades
Suppose that your favorite cause is increasingly being shown to be a sham. Say resisting the erosion of gun rights.

And suppose some other problem is getting all the attention in the news, but you aren’t directly affected by the problem. Say racial disparities in law enforcement and criminal justice.

Here’s how some privileged white ammosexuals tried to get a slice of that sweet sweet injustice attention by conflating that real problem with the other fake problem.

This is a screen grab from a video which proves conclusively that a couple of gun nuts have an agenda and video cameras. And that’s all it proves.

The video first shows a white guy carrying an AR-15 rifle. The white guy has an interaction with a police office that apparently concludes uneventfully, because they only show about the first 30 seconds.

Then they show a black guy with the same gun get confronted by the police, and it doesn’t go so well. So they show it all—four minutes of it anyway—from the office drawing his gun, to the guy lying face down on the asphalt, to the arrival of two or three additional officers, to the gun guy being taken to into custody.

I really don’t want to give this video any more views, but if you must see it for yourself.

What else are you going to do when a real problem is getting so much attention lately and eclipsing your fake problem?

Barack Obama’s presidency is in it’s seventh year and he still hasn’t come for your guns. Gun rights have increased under this president. Gun sales soared because so many dupes believe the opposite to be true. And now gun sales are slumping because gun enthusiasts are feeling more secure about their rights. 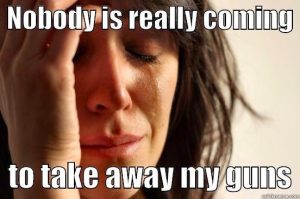