The Green Police State — Better than the Patriot Act State?

By Ted, In Crusades, Pleasures

Earlier today I heard of Mike Beitiks for the first time. He is running for the California Senate seat to be vacated by Barbara Boxer. 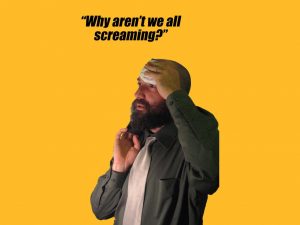 Here is part of his hilarious platform that touches my car-snubbing, earth-loving, peace-mongering heart:

Withdraw military from Middle East. Deploy military in people’s driveways to make sure they’re not taking unnecessary trips, driving when they could be walking, etc …

It solves three problems at once:

Now that’s the kind of creative thinking we need in Washington DC.

Of course, it does create a police state. That’s a bad thing. But we’ve lived with the Patriot Act for going on 14 years now, that’s only a little less obvious than soldiers in your driveway telling you to walk to the goddamn store.

If you don’t like either of these scenarios, don’t support Mike Beitkis and sunset the Patriot Act, which either will or won’t happen while I sleep tonight.

Note that the opinions expressed here are solely my own and do not reflect any position of the U.S. government or the Peace Corps.